1517 H Street has deep roots in Sacramento’s history. While today our residents call The Mansion Apartments home, memories have been created on this plot of land for decades. It wouldn’t be right if we didn’t share Our History.

Located at 16th and H Streets, the site was originally developed in 1958 as a hotel by E.A. Corum & Son Builders, designed by Dreyfuss + Blackford Architecture (D+B). Named the Mansion Inn due to its proximity to California’s Governor’s Mansion, the Inn opened as a two-story structure featuring 51 units, a garden courtyard with pool, a restaurant, and a cocktail lounge. It quickly became a Sacramento stronghold, where politicians, musicians, and business people hobnobbed and families celebrated weddings, engagements, and graduations. The Statesmen Lounge and Terrace Room & Court, classic examples of the “mad men” era of mid-century modern design, became integral spaces in Sacramento’s history. It’s even rumored Governor Pat Brown would sneak across the street from the Governor’s Mansion for a dip in the pool.

In 2017, the Mansion Inn was featured in a new book titled “Motel California” by Heather M. David, showcasing the State’s mid-century motel architecture. 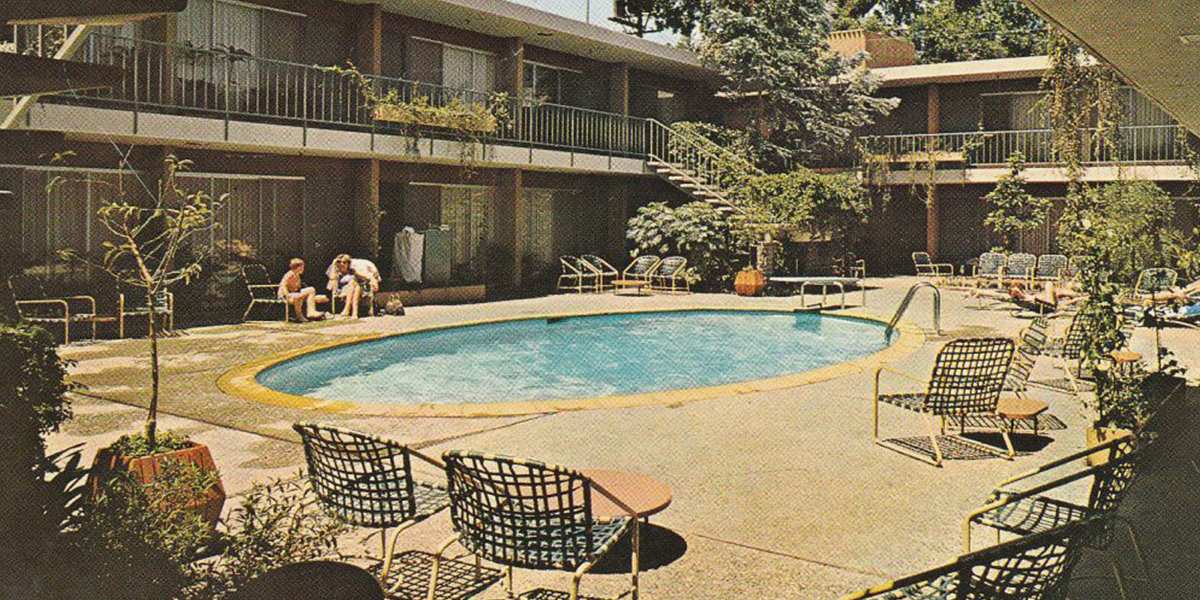 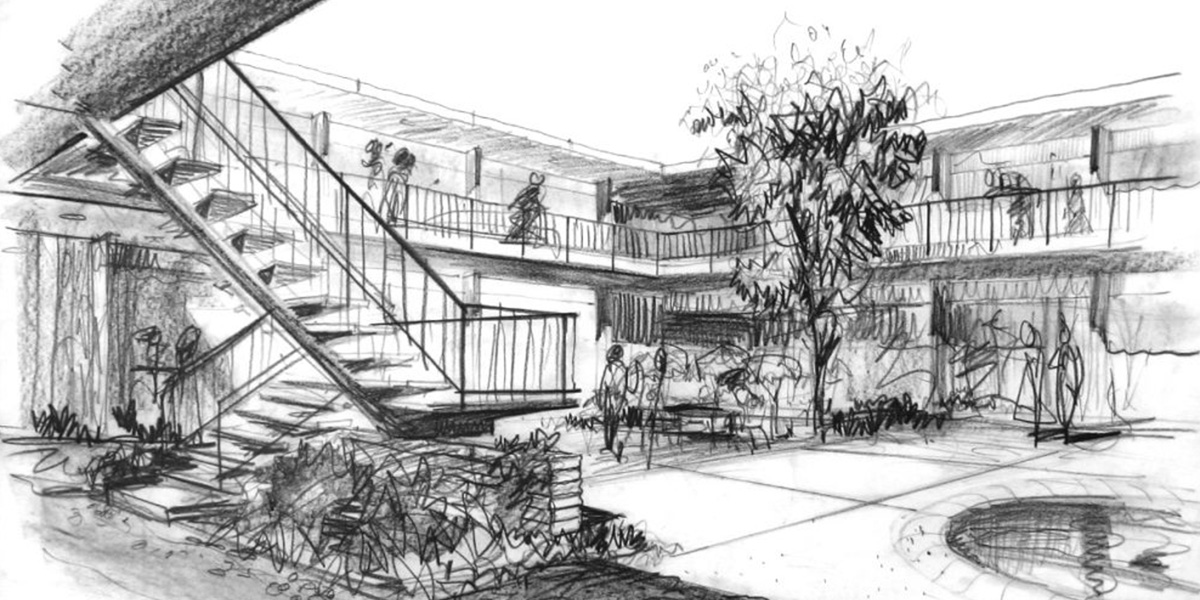 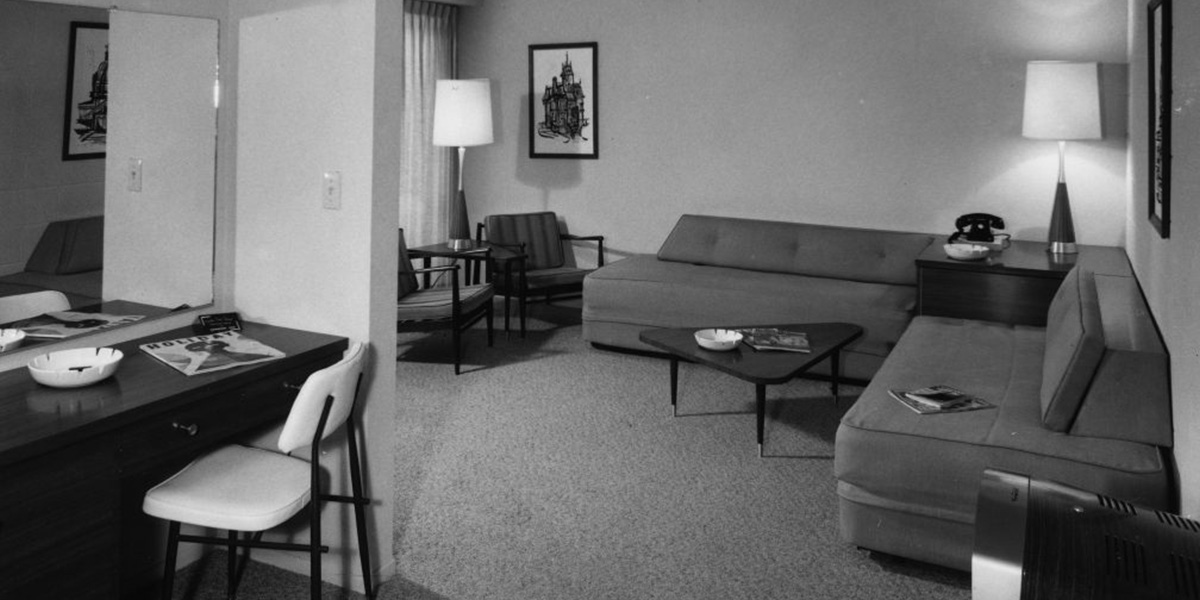 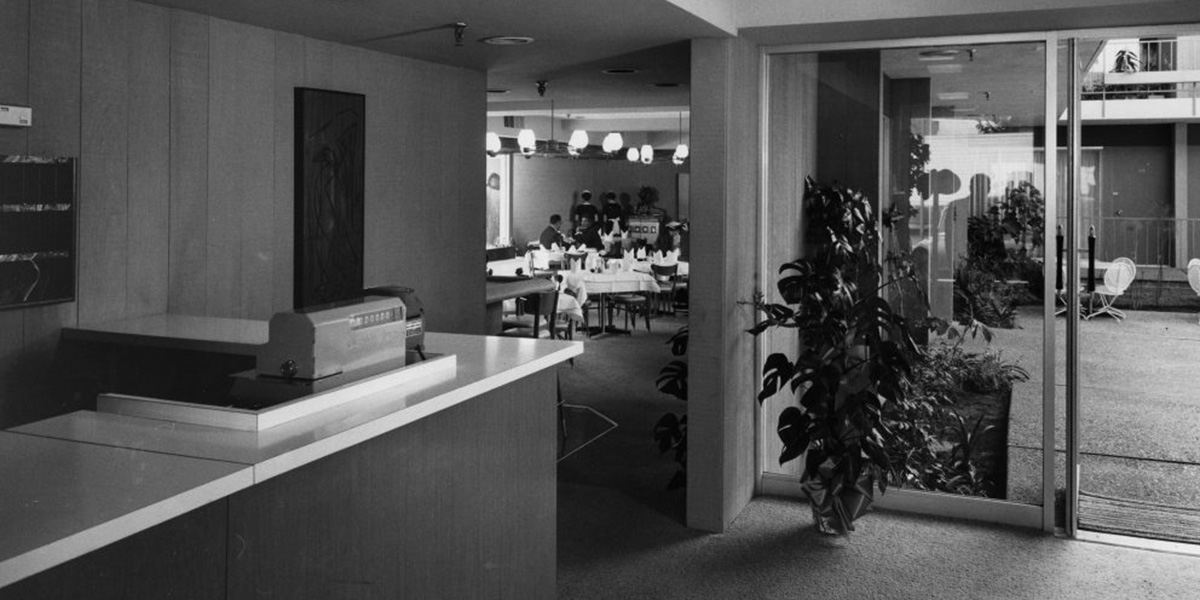 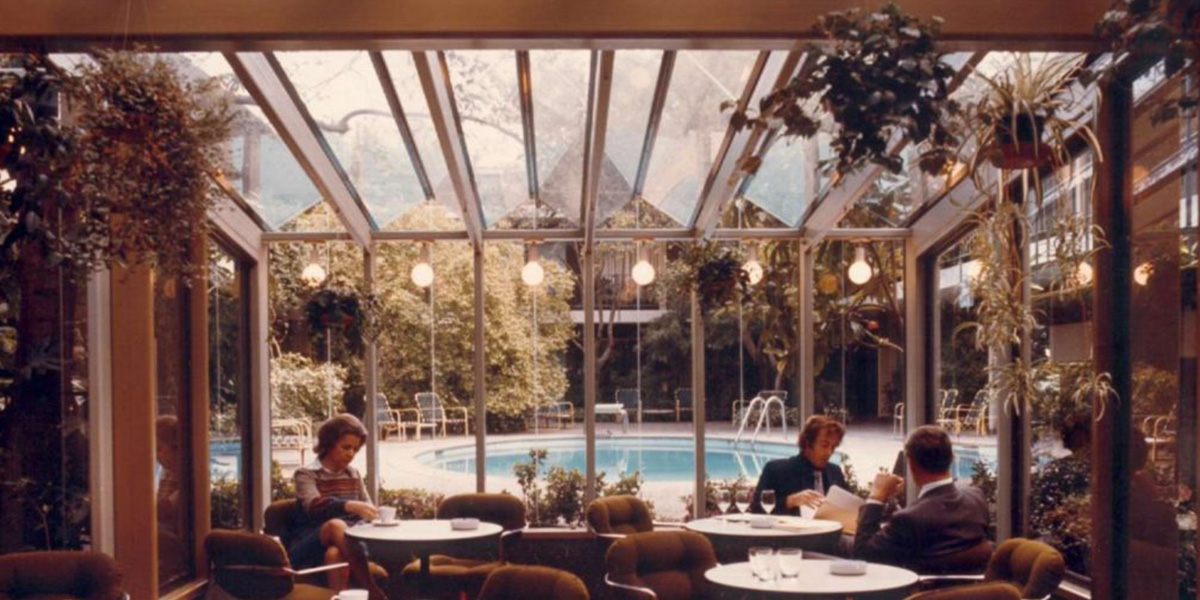 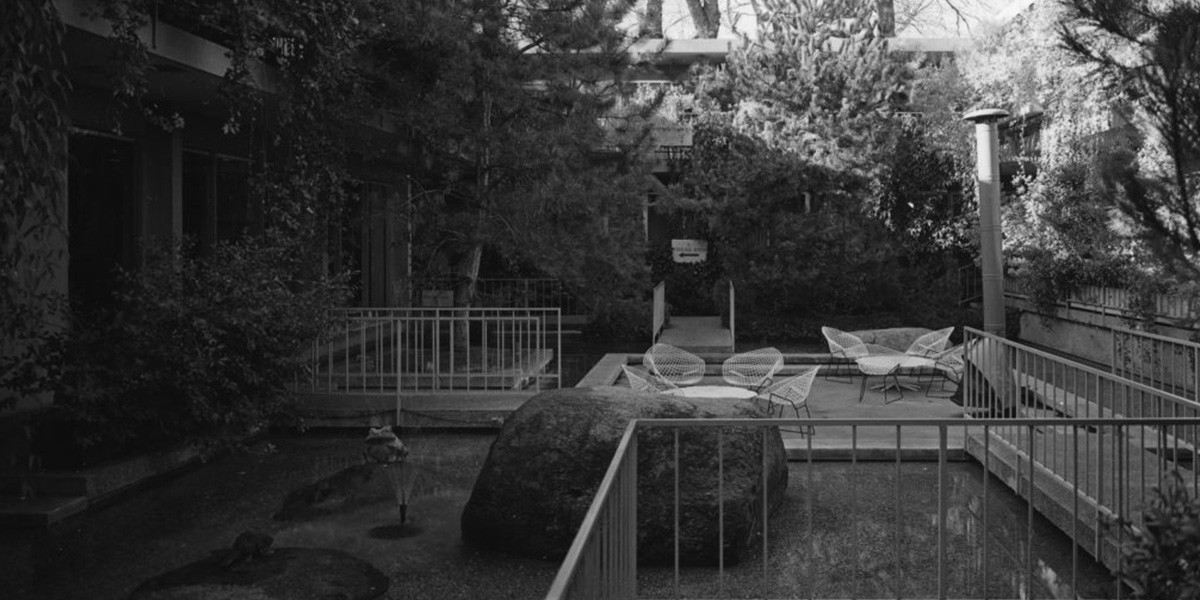 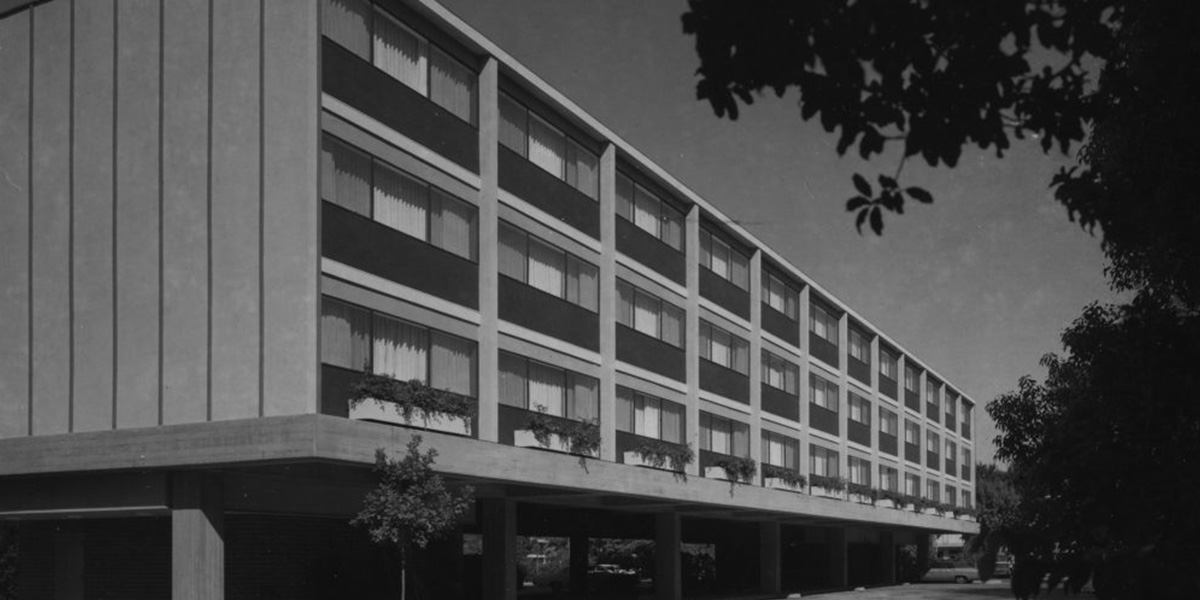 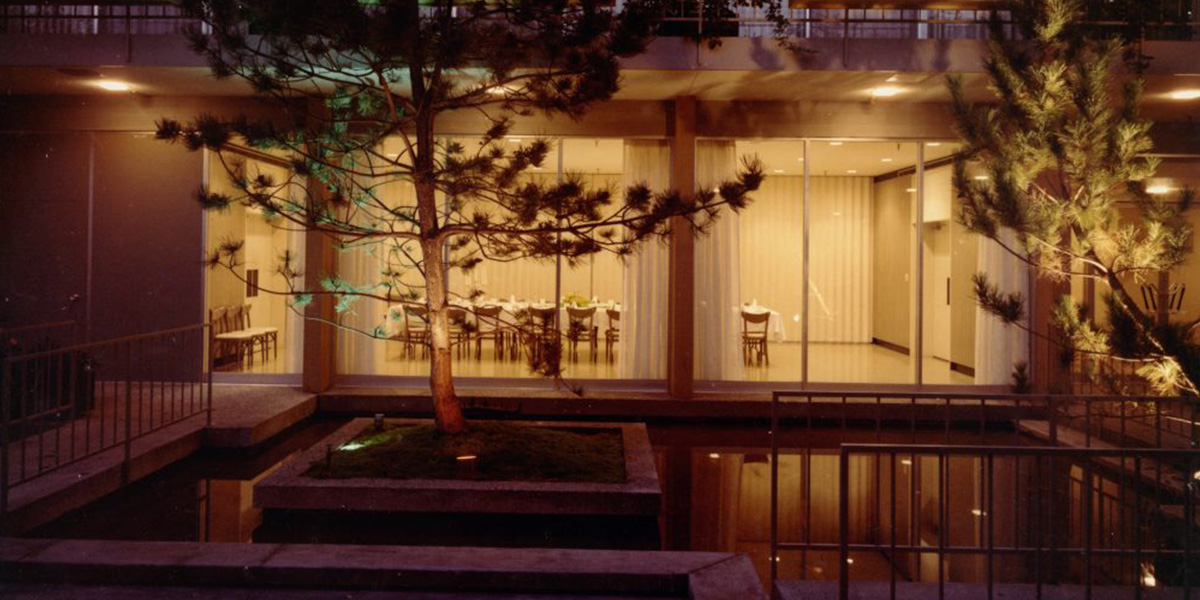 Terrace Court with view into the Terrace Room, one large banquet room divisible into three, with movable partition walls.

Over the next three decades, the Mansion Inn was expanded not only once, but three times. The hotel’s developer, Ray Corum, undertook the expansion “in the firm belief, based on 12 highly successful years in the hotel business, Sacramentans want and appreciate quality,” and “the business future of Sacramento, particularly downtown, is most promising.” The Mansion remained a fixture in Sacramento’s Downtown through the 80s, always welcoming its guests in the heart of our city.

In the 1980s, the property was divided, and the Mansion Inn was sold off to the Clarion Hotel chain and rebranded. Over the next two decades extensive renovations were made to match corporate standards and the hotel was stripped of much of its mid-century appeal. Unfortunately, The Mansion Inn Clarion Hotel closed in 2012, and the land sat deserted, eventually becoming a blight on the neighborhood.

In 2016, The Mansion’s current ownership became involved in the redevelopment of the site and six years later, we welcomed our first residents. Today’s community – with its conversation pit, boardroom, café, and interior courtyards – is designed by C2k Architecture with the original Mansion Inn in mind.. We share Our History to ensure each resident knows that 1517 H Street has enriched the lives of many Sacramentans, and we’re proud to continue the story of this site as a “place to be” in Sacramento.

Welcome to The Mansion.

The above feature has been largely informed by the research done at Dreyfuss + Blackford Architecture. To read their entire blog post: https://www.dreyfussblackford.com/ronald-reagan-slept-here/.